We all enjoy the successes of each individual

We support all our young people to gain greater independence

Always at the centre of all we do

We work with parents and families to ensure the best for children.

We work to promote respect for individual differences, needs and disabilities

Father Christmas came to visit the infant department on Wednesday 18th December.  Everyone joined in jingling lots of bells and tambourines waiting for him to arrive.  We could hear him coming closer ringing his loud bell.  His helper elf helped Father Christmas to give everyone a present.  Lots of children ripped open their presents straight away! We all waved bye bye to Father Christmas who had to go back to his reindeer and sang jingle bells as he left.

A visit from Father Christmas

A group of pupils from Rocket, Neptune and Apollo classes went for a Christmas trip to The 'Aladdin' pantomime in the Harlington Centre in Fleet. Oh yes they did!  Everyone really enjoyed the performance and many were seen to be rocking in their chairs to the songs!

Upper School Christingle Service at St Peter's Church; we had a wonderful time with parents, carers and our friends from Fernhill. Happy Christmas, everyone!

Three students from 6th Form have participated in the government-sponsored Centenary Battlefield Tours Programme; this was a four day trip to Ypres and the Somme, visiting cemeteries, memorials and museums, in addition to attending the Last Post Ceremony at the Menin Gate. They behaved impeccably, and we are very proud of them.

Leaving Dover
It was freezing cold!!
Remembering the family of school staff
We had a Battlefield Guide to help us understand
We learned the stories behind the cemetry sites
We left poppies at the Thiepval Monument
At the Moreuil Wood memorial
We visited Compiegne, the site of the Armistice
This ring was covered in 'Peace' in many languages

We raised money for Genetic Disorders UK by taking part in Jeans for Genes day by wearing jeans to school and having a special assembly.

Every class in school decorated some pieces of denim to make a patchwork quilt for the display board at the entrance of the school which looks great!

Thank you so much to the volunteers from Zurich that came into school to help us.  They decorated some of the corridors and made some raised flower beds for the 6th form students.

Thank you for being so great to work with!

Staff and students wore orange on Friday to raise money for Challengers play scheme.  Many of our students at school access this play scheme which is an invaluable out of school play experience for them and respite for their parents

The 6th form held a garden party to say goodbye to this years leavers.  Family, friends and Governors were invited.  Everyone enjoyed the tea, playing games together and watching the farewell photo slide show

Although we were fortunate to have dodged the showers during our first sports day we were not so fortunate on our second sports day, but rain did not stop play and we managed to hold it inside by using the dining hall and corridor!

Focusing on the theme of ‘The Fairy-tale of MOVE’, the students were split into groups of six to access three different activities, before all coming back together to tell the story of Sleeping Beauty using the large parachute.

Henry Tyndale remembered the 888,246 commonwealth military who died WWI; students each made a poppy and added it to the wreath in the foyer, 'signing' their name on the 'remembrance page.'

On Friday 18th November the whole school took part in an opportunity to support the annual Children in Need charity fundraising day.  This year the theme was 'Spotastic' and everyone came to school dressed up. There were spots everywhere! We all joined together in the morning for a whole school assembly, setting the scene by listening to and watching the Children in Need single.  This was followed by learning how the money raised supports many children. The children were encouraged to come to the front of the assembly and put their donation into the collection tins. All of the children made their own 'spotty' bunting in their class groups and came to show their class bunting to their peers at the front of the assembly.  This has been displayed in the hall for everyone to see and enjoy.  Jupiter class hosted a brilliant cake sale and all of the pupils in the school had the opportunity to go to Jupiter class to buy their spotty cake. 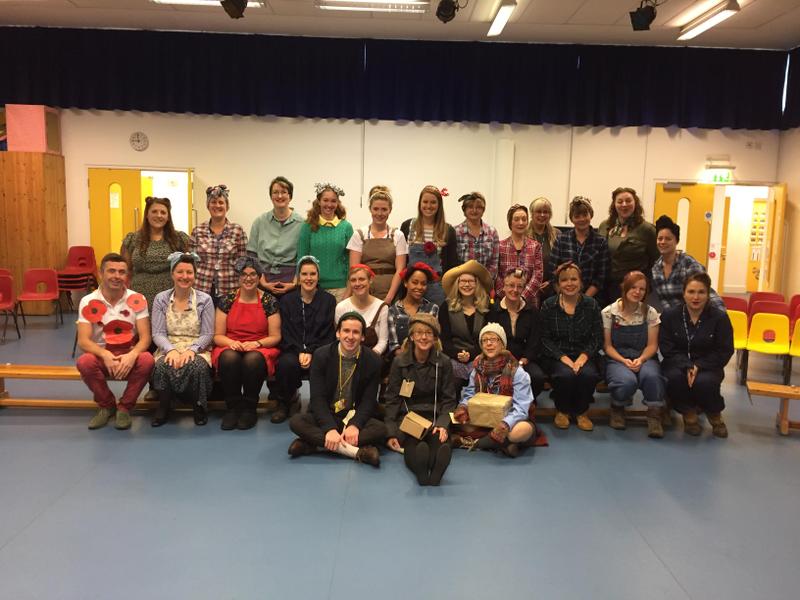 On Friday 11th November the Infant department and Sun class had a themed day entitled 'Evacuee day', to coincide with our World War 2 topic. All of the pupils came dressed as various styled children from the war years. All of the staff from the classes also joined in the dressing up. The children took part in four different activities throughout the day - dancing to a variety of war time songs and dances; making a wartime bread and apple pudding; some wartime art and some role play with an air raid shelter. The children had a very busy and fulfilling day.

In October we were very fortunate once again to have a visit from the OSJ orchestra who worked with groups of pupils from Keystage 1 in the morning. They also did a performance to the whole school in the hall during the afternoon.  Some pupils even had the opportunity to conduct the orchestra!

On Friday 23rd of September we held an own clothes day with many pupils coming to school wearing denim to raise money for the charity ‘Jeans for Genes’.  The staff and pupils looked great in their own clothes, with some managing to wear double or even triple denim, which was very impressive.  In preparation for this event many of the pupils learned about the work of this charity and all pupils decorated a square of denim, which were patched together to create some 'jazzy' jeans. One group of students also iced jeans onto gingerbread men as part of their attention session.  The whole school also came together for a special ‘Jeans for Genes’ assembly with the highlight being everyone dancing to the song 'Blue Jeans'. We are counting the money and will let you know the grand total soon.

On Thursday 12th May 2016 Hampshire Fire and Rescue visited the school to work with pupils from the primary department.

All pupils enjoyed having the opportunity to explore items related to fire engines from blue lights, hoses and torches through to uniforms.  May pupils were also able to climb inside the fire engine and pretend to drive the vehicle through the streets in the simulator.  As well as the simulator they also relished the opportunity to 'put out the fire' using the hose.  Younger pupils enjoyed a story about a fire engine, whilst older students learned about fire hazards and prevention in the home during their visit to the Fire Hazard van.

In March Mill Cottage Farm came to school for the day.  Pupils from across the school had the opportunity to go and meet the animals, which everyone was really excited about.  There were rabbits, chickens, pigs and goats as well as alpacas that pupils could feed and touch.  There were also hands on activities to participate in such as a milking a cow (though not a real one) and carding wool.